I don't know about you, but there are times when I feel overwhelmed up to my uvula with the flotsam and jetsam of everyday life, yet feel overwhelmingly empty at the same time.
I guess my mind is filled with things that shouldn't bear thinking about, things that make me go d'oh! and d'uh? Things that I know don't make sense, but which still drive my one poor remaining brain cell into needless overdrive. Things that leave me questioning, unfulfilled, and empty.
It's during times like these I want to just dive into the deep, deep, blue. To leave my cares and worries up on the surface, where they can do the Macarena with the sunlight on the waves. To go deep, deep, deep, where they can't follow me. I just want to go where it's calm and blue and peaceful, a place where even the cold ceases to be a bother, a place where I can blissfully not give a shit where up or down or left or right is. A place where I don't have to care. A place where uncertainty, expectation, frustration, and disappointment don't exist.
Then my mind goes back to the time last year, when I did dive into the deep, deep blue of nothingness. (Well, I snorkeled actually, but what the hey.) I didn't do it to escape anything; no, not at all. I did it to see whether the creatures I had previously only read about and seen on TV were as awesome as they were said to be.
They were more than awesome. The first sight of them made me suck in my breath -- which isn't a good thing, something that dumbass snorkelers like me manage to forget. I ended up with lungfuls of seawater the first few minutes. But I'd had my glimpse of the first of those wonderful animals, and I wasn't going to settle for just a peek. So down again I went.
Swimming with those magnificent creatures -- it was an experience I will never, EVER forget. Mimi Lenox, the Queen of Bloggingham Palace (yes, she's royalty *curtsey, bob, bow*) dubbed me the woman who "Swims with Whale Sharks." You know, something kinda like Kevin Costner's Dances-with-Wolves or maybe Linda Lovelace's Swallows-It-All. (OK, I made that last part up. But she did, didn't she?)
I jokingly asked a friend to call me "Mistress of the Universe," but that's a title I can hardly live up to. I just thought it sounded super cool.
Before the encounter with the whale sharks, the guide told us that the whale sharks weren't to be touched. But I couldn't help myself, especially since they seemed to play with me, rising up and up until they were just inches away from me, letting my fingertips stroke them. Then they sank into the deep where I couldn't follow, to swim away. (Their skin felt like mossy stone to the touch, btw.)
In the video clip above, you can hear me uttering something like "Uhhhh-ooohhh-uhhhh-hmmmm-ahhhhh-ohhhhh" in at least two octaves to the whale shark. I was actually saying something like "you unbelievably beautiful, magnificent, unbelieveable gorgeous creature, you! Ohh you're incredible." That was just one whale shark in this vid; I swam with several of these awe-inspiring beings in one hour. And I crooned orgasmically to them all as well.
In those timeless, saltwater-soaked moments, the world as I knew it ceased to exist. Or maybe I should say the world shrank to something that was a lot smaller, but something that took on an awesome and awful dimension. In a way, it scared the hell out of me, but it liberated me at the same time. It was like I had found myself, at the same time finding something bigger within and without me. For a few moments, for a few deafening heartbeats, it was just me, that space of sea, and the whale sharks undulating inches from me. And I was unspeakably, ineffably happy.
Those whale sharks and the experience of swimming with them taught me a lesson. So now, whenever my world seems heavy and grey, I shut out everything I don't need and revel in the moment. That moment can include a child's slobbery kiss and tight hug, or maybe a friend making me laugh so hard I'm waking up my kids from their sleep, or maybe just watching the clouds turn pink, then russet, then a breathtaking orange at sunset.
It doesn't matter what it is or where I am. Deep blue sea or not, problems be damned, I'm learning to find happiness in the here and now.
So blogged Lizza at 2:19 AM 13 comments:

I've heard there's such a thing. I even know some people who suffer from the affliction. Offspring envy is when the mom or dad -- or both -- feel envious of their child's characteristics and/or achievements. Then there's second-degree-offspring-envy. An example of this is when Adult A refuses to believe that the child of Adult B is better than Adult A's child; that whatever the child of Adult B has achieved, he or she couldn't have done it without the help of Adult B.
Confused? No worries. I am too.
What I am NOT confused about, however, is my near-absence of offspring envy. I say "near-absence" because there is some envy I feel, somewhat. I do envy my progeny to an extent. I envy them their youth and innocence, their fresh start at lucid life. I envy them the time where they are now in their lives, that still-pure and carefree period wherein any mistakes they commit, any wrong decisions they make, will have no lasting impact on how they live, laugh, learn and love.
But my so-called offspring envy is ultrananomicroscopic in comparison to the overwhelming blessedness I feel when I look at my children.
I don't feel sorry for myself because my daughters will grow up to be more beautiful than I ever could be. Their beauty becomes more evident as time passes, and I rejoice in it.
I don't feel insecure because my teenage son is now writing lines that go "I don't mean to be lazy, it's just that I have those moments that I don't realize that I'm being lazy. Perhaps I'm too lazy to even notice." -- a thought I could never have articulated that well when I was his age. The first time I read his blog, it took my breath away.
What I am is someone who is so proud of her children -- yet at the same time someone humbled by the hints of greatness that are emerging from within those beings who will and are becoming more than she could ever become.
So blogged Lizza at 2:41 AM 10 comments:

Sometimes, for one reason or another, you very nearly miss things of unbelievable beauty even when they're right next to you.

Case in point, the sunset in the picture. I had taken a photo of what I thought to be a beautiful sunset just a few minutes earlier. So I put me camera in me bag, sat down, and commenced licking my chops in anticipation of the early dinner we had ordered at the beach restaurant.

Just as we were finishing dinner, one of my companions (I don't recall which one exactly) said something like "Ohhh, look at that!"

Whereupon I swiveled 180 degrees in my seat, and saw this. 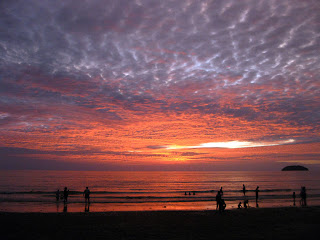 The riot of colors, their vividness splashing across the sky, simply took my breath away. The picture doesn't do justice to what was actually there in front of my eyes.

My beer and pizza lay forgotten on the table (something that doesn't happen frequently, believe me) as I stared transfixed at this blazing celestial photo-op. Dug for me camera in me bag, and skipped a few steps to attempt to digitally capture the moment for personal posterity.

Well, maybe not for posterity. Just an attempt to capture something so unbelievably beautiful, something to later reinforce that what I had seen wasn't just a figment of my imagination.

And to remind myself that no matter how pleasing or attractive whatever it is that is in front of me at the moment (e.g., beer and pizza), that I should pause every now and then to look around me -- to catch things of unexpected beauty that exist silently, which I would have missed because of my other, more earthly, preoccupations. 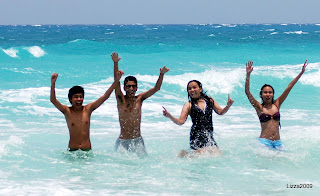 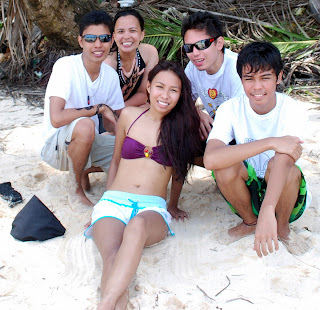 So did the older-timers.
The experience was made even more pleasurable for me the older-timers seeing as how the first-timers were enjoying themselves in a new place, and, more importantly, experiencing a new place with people they love and who love them.
They danced.
They sang.
They laughed.
So did I. I couldn't help it. The dancing, the singing, the laughter, they were all contagious. OK, so maybe I didn't dance at all. But that doesn't mean I didn't feel my young relatives' exuberance. Even when I was convinced it was all a big conspiracy and the young ones were out to kill me. 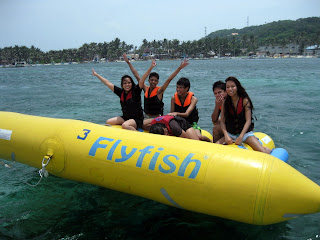 I kid. They are good people, kind people, who manage to screw up sometimes (perhaps unwittingly)...but then, who doesn't? I'm proud to call them family, and I'm happy many of us got together recently to celebrate fun, happiness, and even some not-so-pleasant drunken moments with each other.
Amazing how the people you're with can color your experience of a place.
{Yes, DaddyP, I did get some baby powder-fine white sand in between my toes again...and perhaps in my undercrackers...right along with soothingly-aquamarine sea water.} 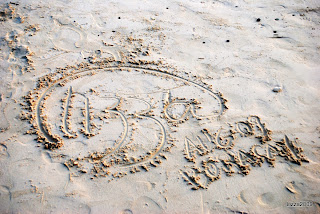 Yes, I do identify with this song somewhat.

I've been a fan of Morrissey -- or the Smiths way back when. I was a lot younger then, just like Morrissey. I was perhaps a shade thinner than he is in the video.

I also had a mile-high coiffure that maintained its height and stiffness, thanks to hairspray. But I never left my shirt unbuttoned to the middle of my chest -- though I was as flat-chested as Morrissey back then (still am), nor did I have a sprig of anything in the back pocket of my jeans.

I was never a Morrissey lookalike, but I loved his music. That hasn't changed. Until today, more than 20 years after I was introduced to the music of The Smiths, the lyrics of many of their songs hold true for me.

Save me some extra-hold mousse and a sprig of thyme, and happiness in the haze of a drunken hour. Let's make Caligula blush.
So blogged Lizza at 4:41 AM 7 comments: