My daughters had their birthdays recently and where there's a children's party, there are games. Not just children's games...adults are required to take part too. Well, adults taking part in the games isn't really a requirement, but you'd really be a spoilsport if you didn't participate. To make a long story short, it was a truly fun affair. The restaurant's mascots behaved themselves, I'm glad to say, and didn't cause a scandal.

Anyway, one of the games involved passing around a pen in time to music, and the unlucky bastard person left holding the pen when the music stopped had to demonstrate some of his or her talent.

Of course, I found myself feeling a tad anxious when the game's rules were explained.

What talent could I perchance show if the pen happened to stop in my hands? I don't have any.

Even then, I can't do the Papaya Dance as well as the US Ambassador to the Philippines does it. (Kudos to you Ambassador Kenney, for showing your lighter side. You sure are no spoilsport!)

Talent...alcohol. Oooohhh, that's an idea. I could show to one and all just how much beer I'm capable of drinking! I'd kick everybody else's ass in that talent contest!

It turned out I worried unnecessarily; the pen never stopped in my hands. But everybody had fun, and that was the important thing.

I hope my beer-drinking talent will come in useful somehow. I'm about to apply for a job that'll take me to places I've only dreamed about. (If all goes well, I might be able to visit you and the TG, DaddyP! And maybe even Penfold too!).

The ability to drink copious amounts of alcohol, being a smartass..and some other abilities I won't mention...will they make an impact on the hiring personnel? Wish me luck!
So blogged Lizza at 3:09 AM

Nest kids' party you'll have to sneak in a 6-pack just in case.

Making up the spare bed now ...... do you take sugar in your morning cuppa? Bring plenty of warm clothes and an umbrella ......... er, you're not bringing your children are you? ..... just asking you understand - tee hee.

Though, how about a visit to India too? We appreciate a talented, alcohol guzzling, unmentionably-skilled, hot filipina too, y'know.

Queen wants a visit too! Would you like to come to Bloggingham? I promise no dungeons!

my mind went STRAIGHT to the gutter when you said...."other abilities I won't mention"....lol.

Best of luck with the interview!

I shall keep everything crossed for you - except my legs...

I think I would have felt a little aniexty too having to show other children and various parents my talent...playing the air guatiar...
oh shoot...I can't really spell either does that count as a talent...no it should!!!

And happy birthday to your kids!

The job is YOURS!

Why not just show up to to the interview drinking? Ya know, really Wow them from the beginning! ;)

Good luck on the job!

(First time here; I'll be back around, though)

Hoping you are safe. I saw the flooding and tragedy happening in your neck of the woods...

Please let us know when you can.

Just checking in. I read about the flooding in and around Manilla. Everything OK?
Frank

Checking in again. Hope all is good.
Have a Great Day
Frank

I am fine, thank you my dear blog buddies.

My blogging mojo seems to have disappeared again. *sigh*

Will find it posthaste. 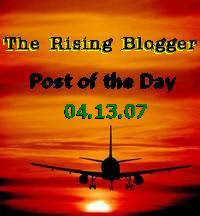 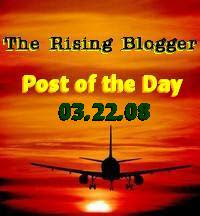